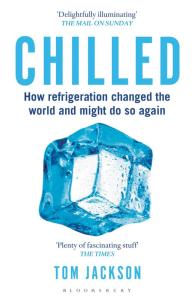 On a hot day in London recently, I took refuge in the air-conditioned basement of a bookshop. My eyes gravitated to a book called Chilled: How refrigeration changed the world and might do so again. The purchase felt entirely appropriate.

Chilled tells the story of how the power of cold was harnessed, beginning with the passive technologies of ancient cultures, right through to the pulse refrigerators used in quantum computing.

Humans mastered fire a long time ago, but cold is very new. As Tom Jackson puts it, “Palaeolithic man had little trouble torching a wooden stick, but had to wait several dozen millennia before he could put an ice lolly on it”. The science of cold is actually rather complicated and was completely misunderstood. Aristotle taught that there were four elements: earth, fire, air and water, with the latter being the source of cold. Later theorists proved beyond doubt that water was not the source of cold, but thought that there must be one – a ‘primum frigidum’ of some kind. After all, there was a heat force called ‘phlogiston’ – everybody knew that. There must be an equivalent for cold.

Centuries of theory went into this, and the book delights in the eccentricities of alchemists and experimenters, the succession of curious minds that picked apart the laws of the universe to understand cold. Some thought that ice hurts your hand because tiny invisible darts of cold called ‘spiculae’ are shooting into you. For a long time early chemists, or chymists as they were at the time, thought that there were ‘frigorific particles’ at work.

The truth was finally unlocked: there is no such thing as cold, only absence of heat. It went against thousands of years of common sense. There was an even greater leap of the imagination in identifying that there is no ‘phlogiston’ either, and that “all motion, all heat, all chemical activity and indeed all biological activity was a product of energy.”

Tom Jackson patiently assembles the jigsaw of this story through the ages, as the science finally emerges. The book turns alternately between the science and the commerce of cold, as engineers and enterprising merchants develop devices or build networks for selling ice. The book is full of great stories. One of my favourites details the Tudor brothers who spotted the opportunity of cutting ice in Boston and shipping it to sell in the tropics. Their ship arrives in the West Indies with ice to sell to people who have never even seen it before, who have no idea what to do with it, and are surprised to find that it melts. Frederick Tudor drew on his childhood recipes to quickly make some ice cream before the stock melted away, and managed to sell just enough in the local parks to get the ship home again.

Chilled tells the story of the ice cutting trade, and how it was supplanted by artificial ice making, and then eventually the domestic refrigerator. We see how the widespread adoption of refrigeration changed people’s definitions of ‘fresh’, broke the connection with the seasons, enabled global trade, and changed the way we shop and cook. Chapters detail the development of the ‘cold chain’ that keeps food chilled from farm to fork, and we end with the role of refrigeration in skyscrapers, space travel, data centres and teleportation.

I’d have like a little more on the future of refrigeration in the developing world, on efficiency and the role it could play it moderating energy demand and climate change. But those are my interests and it’s not a shortcoming on the author’s part.

If the story of the fridge sounds boring, it’s probably because we haven’t looked close enough, and Tom Jackson’s is a spirited and entertaining popular history.