I mentioned a couple of weeks ago that buses are one the greenest forms of transport. They outperform cars on CO2 emissions and on the amount of road space they occupy per capita. Good bus transport can cut greenhouse gas emissions and reduce traffic congestion.

Buses are an inclusive form of transport too. They’re vital for people who can’t drive, such as children and teenagers, older people and those with a disability. It’s easy to forget since we don’t buy a ticket every time we drive our own car, but they’re almost always cheaper than private motoring. That means they’re accessible to those on lower incomes.

Another important thing about buses is that they go to places where other forms of public transport don’t go. Outside of big cities, the train is unlikely to get you to the dentist or to the supermarket. A quarter of British households don’t have a car, and the bus is the most common form of transport for these everyday trips. They’re a critical link for rural communities which could otherwise be completely cut off for non-drivers.

Unfortunately, buses are consistently under-funded, and that creates a vicious circle of poorer service, fewer users, and further budgets cuts. The most inclusive and greenest form of public transport is in decline in Britain. According to figures from the Campaign for Better Transport, spending on supported bus services has almost halved since 2010, and over 3,000 services have been reduced or withdrawn. 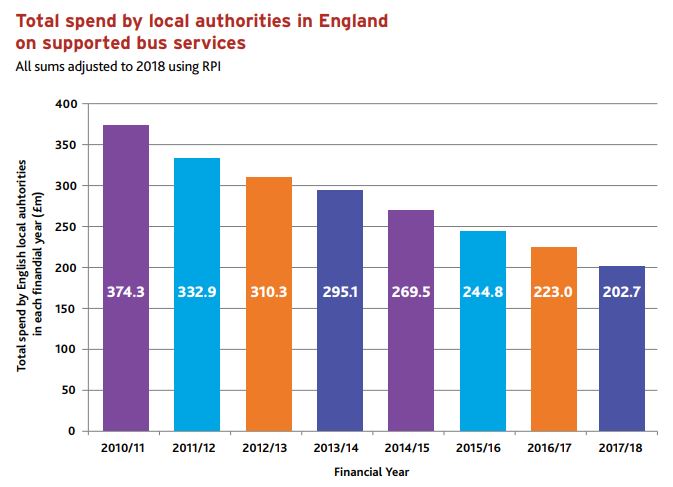 It’s easy to say that buses are unloved and that people prefer cars, but where great bus services are offered, people use them. It’s also worth considering who drives and who rides buses. Compare the media hysteria over the ‘war on motorists‘, and the silence over cuts to buses. Bus users are poorer, or too young to vote. They’re politically marginalised and easier to ignore. In times of austerity, bus travel can be cut without a public outcry. It’s a political easy target, but a shortsighted one in an aging population and when transport emissions refuse to come down.

Now, some will want to know why governments should keep supporting bus services. Surely they should stand on their own two feet and not depend on taxpayer subsidy? That’s a perfectly valid opinion to hold, as long as you hold it consistently and also oppose government support for cars, trains and air travel.

And in case you hadn’t heard, the chancellor plans to announce £30 billion in road spending over the next five years. Last year £48 billion was announced for the railways. Billions go to aviation every year in tax exemptions and infrastructure. We don’t know yet who will pay the £14 billion for Heathrow’s third runway, but you can bet your bottom dollar that the taxpayer will be asked to contribute.  Buses get around £200 million a year, and free bus travel for pensioners costs around £1 billion. If you want to grumble about that, I’d suggest you need to straighten out your priorities.

The government has national strategies for aviation, roads and rail. There is none for buses. It’s time for one, including a new coach network, bus rapid transit, and electric buses. Isn’t it time to re-habilitate the greenest form of public transport?