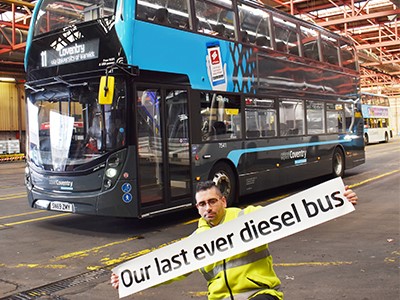 National Express is a multinational public transport company that is best known in Britain for its coaches. In February this year it released this picture. The company has bought its last diesel bus.

From here on in, it will be investing in electric vehicles. The company’s first electric buses are entering service in the Midlands this year, and all their buses will be electric by 2030.

Coaches are a little trickier. There are fewer opportunities to charge on longer journeys and there isn’t actually a viable long distance electric coach on the market yet. National Express will have to develop it, and they are seeking an industry partner to do it. In the meantime, the first electric coach will be trialled next year on the shorter route out to Stansted Airport. If all goes to plan, their whole coach fleet will be electric by 2035, a few years after the buses.

“Bus and Coach travel is already one of the greenest ways to get around, with each bus removing up to 75 cars from the road”, says the CEO Dean Finch. “However we understand the imperative to go much further, so we are today setting out an ambition to be the first zero emission transport group in the UK. Our decision to never again buy a diesel bus in the UK coupled with our support in leading the zero emission transition in coach will place our UK operations at the forefront of efforts to tackle climate change and poor air quality. We simply believe this is the right thing to do for our customers, the communities we serve and our stakeholders.”

Dean Finch is entirely correct on the green credentials of bus travel. The more people choose to travel by coach the better, and electric coaches might help to make it a more desirable form of transport.

It will also do away with the biggest downside of buses, which is pollution from diesels in traffic. I used to work on the same street as Victoria Coach station, London’s busiest coach depot. There was a queue of buses waiting for their turn, idling in the street between two tall buildings, with nowhere for the pollution to disperse to. It was known as one of the most polluted streets in London, and if opened the window, I’d get a thin layer of black dust settling across my desk. That will be a thing of the past as coach and bus travel shifts to electric.

Where National Express go, others will hopefully follow, and it ties in with recent government announcements about bus travel too. After years of neglect, bus travel seems to be valued again. I’m not going to say this often, but this might be something Prime Minister Boris Johnson will excel at – as a former mayor of London, he understands buses. London is a global success story for its bus transport, and if his government can bring some of that learning to the rest of the country, we might be able to put a dent in those stubbornly unyielding transport emissions.