Last week there were local elections held across Britain. As usual, the local political parties dropped their flyers and bulletins through the door. The local Labour flyer listed a series of reasons to vote for them. Point number one on the list was this:

Luton Labour will: Build a strong local economy by growing Luton Airport to provide good jobs and prosperity for our town. 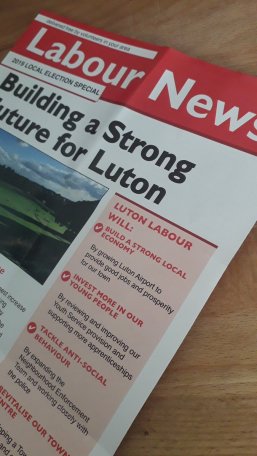 This is the same Labour party that forced a declaration of a climate emergency through Parliament last week.

There you have a microcosm of the whole climate change problem. In an age of climate breakdown, airport expansion cannot happen. But the economic growth is too hard to refuse – “it’s not going to stop, is it?”

We know the causes of climate change, the damage of fossil fuels, beef ranching, deforestation and rampant consumerism. We know the consequences for the world’s poorest, for low-lying island states and coastal communities, the way that climate change will destroy habitats, threaten the world’s food supplies and drive more extreme weather. But “we’re not going to stop economic growth. It’s not going to stop, is it?”

There’s a powerlessness to those words. It’s as if airport expansion is a force of nature that, like King Canute before the incoming waves, cannot be held back. We have more agency than that. We have choices about how we generate economic growth. Believe it or not, we can actually say no to economic growth when it is morally wrong.

Don’t get me wrong – I understand the huge opportunity that the airport represents. If there was no climate change, we could make a case for expansion. But there is climate change, and that makes airport expansion the wrong thing to do.

A couple of months ago I received a letter from the airport through the post. It explained the “sustainable future growth of London Luton Airport, the UK’s fifth largest and fastest growing major airport.” But there is no such thing as sustainable growth of an airport right now.

There is a modest campaign against Luton Airport expansion. It needs scaling up, and a wider town debate about the future of the airport. If you are interested in being a part of that, let me know.