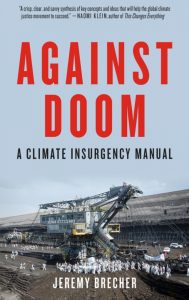 2019 has been the year of radical climate protest in Britain. There have been mass actions before, including the fracking protests, but nothing at the scale seen this year with Extinction Rebellion. As the movement ramps up its civil disobedience here, I wanted to learn from across the pond. The US has had a couple of waves of mass protests actions, the most high profile being Keystone XL and Standing Rock.

Against Doom is a concise guide to what Jeremy Brecher calls the ‘climate insurgency’. It’s not a phrase I hear much, but he describes it as a “global nonviolent insurgency – a withdrawal of consent from those who claim the right to rule – manifested in a selective refusal to accept and obey their authority.”

In particular, that’s a failure of government to act on climate change, leaving it in dereliction of its basic duties to its citizens. In such a context, “we the people have a right, indeed an obligation, to resist.”

Brecher’s book begins with a short description of the global movement and the sorts of actions taking place. It sets it in the context of the Paris Agreement, which governments signed off knowing full well that it was inadequate. Then it goes on to describe why civil disobedience works, its strategic value, and how it can create space for change.

The book is particularly strong on racial justice, showing how minority ethnic communities are often on the front lines of climate change – in vulnerable coastal areas, or nearest to the railway tracks where fuel-carrying ‘bomb trains’ pass. This is an aspect of climate campaigning that is more prominent in the US, and if you’ve come across research along these lines in Britain, let me know.

I also appreciated the data Brecher pulls together to show how civil disobedience can gain support, with a promisingly sizeable percentage of Americans apparently prepared to join such a campaign – in theory.

Not everything is relevant to the UK context. The ‘public trust doctrine’, which is a key legitimising argument for the movement, depends on the US constitution and has no parallel in Britain. Some of the language is different, and the specific contexts of shale and its transportation. Nevertheless, there is lots to glean from what has worked and what has failed in the US, and the Break Free from Fossil Fuels protests in 2016 in particular. There’s some pithy material on the weak points of the fossil fuel industry, and how the climate movement can act strategically to undermine it. I may return to that particular topic another time.

Brecher writes with clarity and brevity, and there’s a lot of thinking condensed into this slim volume. As an activist himself, he writes from personal experience and with a real passion for the subject. If you are interested in learning from past climate actions in the US, this is a useful summary.