One of the core principles of a circular economy is that waste is a resource. Rather than being thrown away, we should look at ways to use it as an input for another process. Safi Sana are applying this line of thinking in Ghana.

Their factory takes in 25,000 kg of organic waste every day from the city of Accra. That includes waste and scraps from food markets and slaugherhouses, and waste from public toilets in slum districts. It all goes in a large digester, which harvests biogas. The gas is burned to produce electricity, which is sold straight into the grid – Safi Sana is the first biogas plant in Ghana with a grid connection.

As well as clean energy, the residues from the digester are turned into compost, which is sold on as an organic fertilizer or used on site in a plant nursery. Wastewater is purified and used for irrigation.

Waste processing of this kind is often left to local authorities, or relies on development aid to build the infrastructure for it. In this case, Safi Sana sells electricity, fertiliser, seedlings and clean water, and runs as a profitable business. 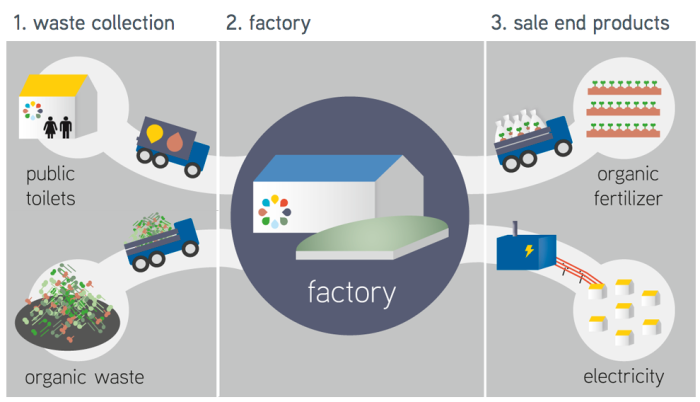 According to UN Environment, the amount of municipal waste generated in Africa is expected to double between 2018 and 2025. That’s a huge waste processing challenge, with serious consequences for health, quality of life, and the quality of the natural environment and wildlife. It will be much easier to solve if waste is taken as an opportunity to create businesses, jobs, and economic development.

This isn’t just a problem for Africa though. In the west we still flush toilets with drinking water, and usually treat sewage as a problem to be solved rather than a business opportunity. Outside of festivals and campsites, there is almost zero interest in innovation around toilets. It’s not something we want to think about.

Organic waste is the same. Where I live in Luton, 40% of the average household’s ‘black bin’ rubbish is food waste. Despite having plenty of potential for biogas, energy and compost, that is currently mixed in with everything else and goes either to landfill or incineration. The council say that separate food waste collection isn’t economical, but you have to wonder why that’s the only option. It seems like there are lots of missed opportunities in Britain’s waste system at the moment, and I’d be interested to see what a version of Safi Sana would look like in a UK context. (I expect somebody’s doing it already and I haven’t heard about it yet, so tell us about it if you know a good project.)