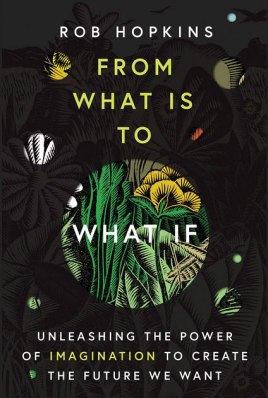 Rob Hopkins is the founder of the Transition Towns movement, and as such has spent the last 15 years nurturing creative local responses to global challenges. It’s given him a rich pool of examples and people to draw on for his latest book, From what is to what if – Unleashing the power of imagination to create the future we want.

Imagination has had a hard time recently. Among other things, it is blunted by an economic system that prioritises profits over people, by technologies that distract us and monetise our attention, and by a political system that insists there is no alternative to inequality and austerity.

“We are living through a perfect storm of factors ruinous to the imagination” warns Hopkins. “As we face vast crises that demand imaginative and urgent responses and a reimagining of everything, we are simply not up to it.”

That sounds gloomy, but the book definitely isn’t. It begins with a story ‘of how things turned out okay’, outlines the problem, and then sets about imagining things differently. Each chapter poses a ‘what if’ question: What if we took play seriously? What if school nurtured young imaginations? What if our leaders prioritised the cultivation of imagination?

The book ranges broadly across education, civic planning, politics, healthcare, exploring the role of imagination and the difference it can make. Each chapter is brimming with real world examples of creative thinking, drawn from around the world and often described in the practitioners’ own words, thanks to almost a hundred interviews carried out in research. Some of these might be familiar to readers of the blog, such as Rolling Jubilee, Park(ing) Day, citizen’s assemblies, or London’s National Park City, all projects I’ve written about before. Others ideas are new to me, including a school in a circus tent in Brazil, or the Better Block movement.

All of these are described with a real sense of curiosity and discovery, as if Hopkins is delighted to have found all these examples of imagination and can’t wait to share them. There’s a playfulness too, as the author explores how art, or storytelling, or improv, or building imaginary streets out of cardboard boxes can help to crack open new possibilities. As with all exercises in ‘what if’ thinking, there may be times when it looks like a flight of fancy too far – what if we replaced all the traffic police with mime artists? for example – only for Hopkins to introduce a story of someone doing exactly that, and it working very well. By the end of the book, it really does feel like anything is possible.

In a world that so often seems to be on train tracks towards disaster, imagination is an essential skill. It allows us to “look at things as if they could be otherwise”, and Hopkins makes a compelling case for making more time for imagination in school, in work, in our personal lives and in politics.