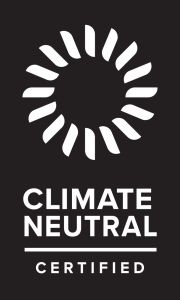 Here’s an initiative that launched during climate week earlier this year, that I’ve been meaning to catch up with. Climate Neutral is a coalition of businesses that have made a commitment to take responsibility for their carbon emissions. They pledge to measure their carbon footprint, reduce what they can and offset the rest. Companies that have done this, and have submitted a plan for reducing their emissions, can then use the Carbon Neutral badge. It brings a common standard and transparency to corporate efforts to bring their emissions down.

It’s not the first certification scheme for companies taking action on their emissions. The Carbon Trust has a scheme that’s used by groups such as BT or Nationwide, and it marks companies taking year on year action. That’s been running for a decade. More specifically aimed at climate neutrality is the certification offered by Natural Capital Partners. They have Sky and Neal’s Yard among their companies. Both are focused on larger firms, and they’ve been doing it for over 20 years.

So Climate Neutral isn’t a new idea. However, it’s reaching a different group of companies – the early signatories look like mainly American small and medium sized enterprises, with lots of outdoor and adventure brands. (I found out about it through Biolite, a renewable energy and camping gear brand. They are the co-founders alongside Peak Design, maker of beautiful rucksacks with price tags I have not yet justified to my wife.) It’s also a not for profit, which lowers the costs of engaging with the programme – comprehensive footprinting can be expensive, and Carbon Neutral are developing a process for companies to use that will be available next year.

One thing that I particularly liked is that it’s not overclaiming for the certification: “We believe in setting a new minimum standard of corporate responsibility for all companies: acheiving zero carbon footprint.” In a world where governments are announcing net zero commitments, every company is going to have to fall in line with that too. So it really is a minimum. The Climate Neutral scheme just gives brands a way of getting started now. And in countries that aren’t taking this seriously, such as the US, the voluntary leadership of business could help to focus minds in government.

I don’t know if the scheme will be international. The website doesn’t say one way or another, and I don’t see any British brands on the list yet. But I hope to see that logo on a product or two sometime soon.