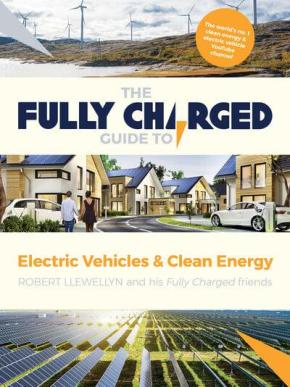 Fully Charged is a YouTube show about electric cars and clean energy. It was started in 2010 by actor and electric car enthusiast Robert Llewellyn (best known as the rubber-headed android Kryten in Red Dwarf). It has now expanded to include multiple presenters, as well as a podcast and live events, and now a book. The show is crowdfunded through Patreon, and the book has continued that ethic through the Unbound platform, where authors can raise the funds for their project by selling copies in advance.

Fully Charged has its own style, which is entertaining and enthusiastic about green tech. It’s optimistic about the future, interested in engineering and science, and always ready to bust myths and champion good solutions. The book picks up that tone of voice, with a series of essays on renewable energy, sustainable homes, and electric vehicles.

There’s a broad range of contributors, including Llewellyn and his co-presenters and a variety of experts from relevant fields. Some of them are in business, some researchers, and some enthusiasts and early adopters. There are chapters on battery storage, heat pumps, and a useful series of sections on places that are leading the way in the energy transition: California, China, Costa Rica, Norway and Scotland.

You won’t find much on public transport, which is a shame. Fully Charged is about clean tech, but it is ultimately made by car enthusiasts. “Whether it’s sitting behind the wheel for our daily commutes or travelling for the holidays or days out with the family” one chapter begins, “cars are an essential part of modern life.” Beyond some pictures of electric buses, there’s very little to challenge the idea of private motoring. Future editions might want to consider trains, boats, bikes and buses – hey, maybe even planes eventually – in that ‘vehicles’ category in the title.

But if you’re aware of Fully Charged, you’ll know that EVs are its forte, and the book makes a very good case for why you should switch to an electric car. It patiently goes through some common myths, and there’s a chapter on how to choose an electric car that will work best for you. The final section of the book introduces dozens of electric cars that are on the (mainly UK) market, showing just how wide the range is at the moment.

This section will date quickly, because there are new options all the time. But right now, if you’re one of the many people debating whether your next car should be electric, this could be a useful book. You might want to dip into the back-catalogue of video reviews, and check out the Fully Charged mini-series ‘Maddie goes electric‘. And if you like cars and can’t bring yourself to watch defiantly 20th century programmes like Top Gear or whatever Amazon’s one is called, check this out instead. I watch it with my son, and he recognises all the electric cars on the road and only the electric cars.

Whatever the limitations of private motoring, there’s absolutely no question that electric cars are superior to petrol cars, and the sooner we transition away from internal combustion engines the better. The future is this way, and Fully Charged do a great job demystifying and promoting cleaner technologies. It’s an exciting time for those who have been following the transition, and it is well captured in this entertaining and well-informed compendium.