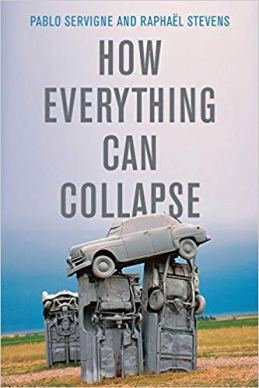 Collapse is something we don’t talk about much. The last time there was a serious discussion around it in the public sphere was probably when Jared Diamond’s book Collapse became a bestseller fifteen years ago. That book fed into the movements that were seeking to avoid collapse by making a transition, something that informs the Transition Towns movement. Generally though, as the authors here say in their introduction, “the question of collapse is not taken seriously.”

What do we mean by collapse? It’s “not the end of the world” say the two self-described ‘collapsologists’ who have written the book. “Nor is it a simple crisis from which we can emerge unscathed.” Instead, we’re talking about a process of erosion of economic and political structures that leave people’s basic needs unmet – things like water, food, clothing and energy.

In our minds, we tend to jump to Hollywood visions of a post-apocalyptic society. Collapse happens fast, leading to social breakdown. In reality, it is rarely like that. History shows that collapse can be slow, that people cope, and that life carries on afterwards. Recent events in Greece, for example, would qualify as a collapse. And yet Greece and its people remain, and you can visit without being pursued by Mad Max style road gangs.

This unhelpful popular imagination is part of the reason why it’s hard to talk intelligently about collapse. Mentioning it makes you by definition a pessimist, catastrophist or millennarian. And yet the alternative is denial. Every civilization that has graced the earth has collapsed eventually. We would not be the first to think that we were the last and the greatest, and that we were special enough to last forever.

How Everything Can Collapse is an attempt to ask adult questions about the topic, give readers some terms to talk about it intelligently, and find a more helpful approach than either denial or survivalism. It gives us an overview of the limits to growth and the planetary boundaries, mounting debt and the institutional lock-in that makes it hard to change direction. The authors talk honestly about the impossibility of making predictions, and how the uncertainty makes it hard to evaluate the real risks. Though they do nail their colours to the mast and say that “we deduce that our society may collapse in the near future.”

(You may or may not agree with that idea, as a gut reaction. If your natural instinct is to disagree, consider this from a leaked report from the investment bank J P Morgan last month: “Although precise predictions are not possible, it is clear that the Earth is on an unsustainable trajectory. Something will have to change at some point if the human race is going to survive.”)

How Everything Can Collapse is translated from the French, and I appreciated the many references to the French thinkers and theorists and we don’t hear as much from in the English speaking world. In some ways the book serves as a literature review of previous attempts to engage with the topic of collapse, including Jared Diamond, transition, degrowth, the limits to growth and many more. It’s full of useful ideas to ponder and learn from.

First published in 2015, it is a little dated in its references. It refers, for example, to the likelihood of an international agreement on climate change, which was signed in Paris that very year. At one point it describes adapting an institution for degrowth as like trying to land a rocket gently back on the ground again, which you wouldn’t choose as a metaphor now that SpaceX regularly do exactly that.

However, in other places it seems rather prescient. You could see Brexit in the discussion on how elites make bad decisions in response to decline, which is very much how I read it. There’s a striking moment where the book describes how a global pandemic could be a trigger for economic collapse, something that resonates in a week when Wall Street has been decimated by the Coronavirus.

Given that all advanced societies in history have collapsed, we ought to be able to talk in grown up fashion about how and if and when our own decline will happen, how it could be managed and what comes afterwards. And if that’s something that interests you, this is a good book to provide some context and language.