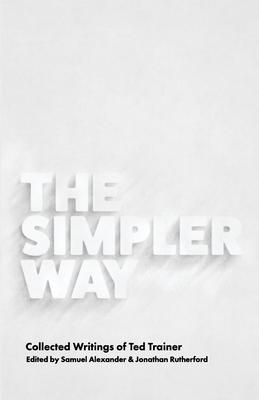 Ted Trainer is an activist academic of the eco-anarchist persuasion. For decades he worked as a professor at the University of New South Wales, while developing a demonstration settlement in a swamp outside Sydney. His work is not widely known, partly because he practices what he preaches and doesn’t travel. It gets a boost here from the Simplicity Institute. Samuel Alexander and Jonathan Rutherford have edited this collection of Trainer’s writing, drawn from articles, book excerpts and journals, with an interview with the author at the end.

The book begins by setting out the global predicament of consumer capitalism. “The way of life we have in rich countries is grossly unsustainable” he writes. “There is no possibility of all people on Earth ever rising to rich world per capita levels of consumption of energy, minerals, timer, water, food, phosphorus, etc.” This is the thought that prompted me to start this blog twelve years ago and call it ‘make wealth history’. Western style consumption patterns cannot be universalised. Far from recognising this inequality and unsustainability, the primary political ambition is to increase GDP growth and make it worse.

Trainer argues that the system cannot be reformed. Inequality, environmental breakdown, debt and resource depletion are not problems that can be fixed. They are fundamental flaws in the design of the system. “A just and sustainable world cannot be acheived unless consumer-capitalist society is basically scrapped.” Instead, a ‘simpler way’ could replace it – one that revolved around local production, participative decision-making, cooperative communities of active citizens living with a much lower ecological footprint. Trainer estimates consumption levels would be at about 10% of the current average.

The transition to such a world is, by Trainer’s own admissions, “unlikely”. It would mean “contradicting and turning back some of the main values and ideas that have driven Western society for over 200 years.” That’s not something a government could do, and Trainer’s revolution is a cultural one rather that a political or economic one. It would not be focused on appealing to the state for change, but on local communities taking the initiative and working things out for themselves. The most likely scenario for prompting that cultural change would unfortunately be an economic collapse. A ‘Goldilocks depression’, as Trainer calls it, would be just bad enough to inspire people to change, but not bad enough to be catastrophic. We may be on the cusp of just such a thing.

There’s a lot in Ted Trainer’s writing that chimes with my own thinking on the futility of what we call development and how we define progress. There’s some overlap with the ideas of sufficiency that I call Arrival, and the phenomenon of failure demand that Katherine and I write about in our book. I also have a lot of further questions.

For a start, Trainer’s model is the eco-village, where people grow their own food and garden their landscape and aim to be as self-sufficient as possible. How feasible is that as a global model, when 55% of the world lives in towns and cities? A village can feed itself. My own town of Luton, at 214,000 people, might possibly be able to stretch to it. But London? Or New Delhi and its 29 million citizens? I found myself wondering how Trainer’s vision would be different if he had practiced his simple living experiments in Sydney itself rather than outside it.

I also think Trainer overplays his hand when he describes how easy and enjoyable his simpler life could be. He talks about building your own house as “easy and good fun”, which I’m not sold on – not in Britain’s climate anyway. He talks about the joys of chopping your own wood, and how “another treat is taking a bucket to collect horse manure.” Trainer says “my sense is that many people would be very keen to live as peasants, rather than stressed and depressed urban rat runners.” I don’t think that sense is right, and I’d like to suggest that ‘peasant’ and ‘stressed and depressed urban rat runner’ isn’t a binary choice.

Still, it’s unlikely that anyone is going to wholeheartedly agree with everything in this book. It pokes as many holes in conventional environmentalism or socialism as it does in consumer capitalism. It’s a challenge and a provocation, and on that basis it is well worth reading.