I’ve been looking at sustainable architecture examples from Africa recently, and the Eastgate building in Harare, Zimbabwe, is an iconic example. Opening in 1996, this shopping centre is a leading example of biomimicry – its design is famously inspired by the ventilation of termite mounds.

Termite mounds are constructed like a chimney. The mound warms up in the sun during the day, and by nightfall the air inside the mound is warmer than outside. As the outdoor temperature falls, warm air naturally vents out the top of the chimney, which draws cool air in through the many underground tunnels and their exits. This is how termites get fresh air into their homes, and keep them at a stable temperature.

Eastgate uses the same technique, and it was the first building in the world to mimic termite architecture in its cooling. Warm air is drawn up through distinctive brick chimneys on the roof, pulling in cool night air at the bottom. The cool air is captured in underground gaps, and released into the building during the day through networks of pipes and tunnels. This technique avoids the use of air conditioning, and uses a fraction of the energy. 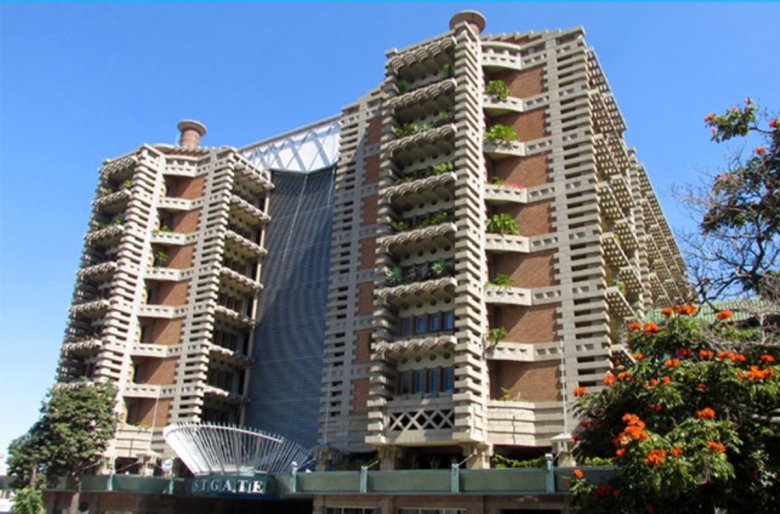 Termites aren’t the only inspiration from nature. The architect, Mick Pearce, also looked at cacti. One of the ways that a cactus can resist high temperatures is that its many wrinkles, ridges and spikes increase its surface temperature. That makes it easier to disperse its heat at night. The Eastgate building borrows this idea too, with facades broken up by concrete shapes and projections, deep balconies and plants.

Along with nature, Pearce also draws on traditional patterns and stonework to create a building that is uniquely Zimbabwean in its design. The interior uses the glass and steel of modern urban highrise buildings. The outside purposefully chooses something more appropriate for an African city.

Mick Pearce has a series of other buildings around Harare that demonstrate intriguing biomimicry ideas, as well as buildings in Australia and China. Here in Britain, a glance at the chimneys on Portcullis House – opposite the Houses of Parliament in London – will tell you that it is directly inspired by Eastgate.