Skip to content
One of Britain's most experienced environmentalists delivers a call to action, and reasons for hope, in a decisive decade. 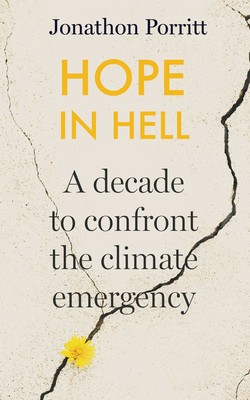 Jonathon Porritt is one of Britain’s most experienced environmentalists, involved in the Green Party and serving as director of Friends of the Earth. He founded Forum for the Future and led the Sustainable Development Commission. He has pursued the green agenda through politics, protest, business and government. And in this new book, he considers our current moment and what it requires of us.

The book provides a kind of ‘state of the movement’ overview. There’s a section that summarises the latest science, which reminded me of Alastair McIntosh’s recent Riders on the Storm. Another section summarises the likely outcomes of the climate emergency. Then it considers solutions, looking at energy and the more problematic issues of flying, cement, meat, and progress on decarbonising the economy in China.

As the title suggests, Porritt wants to emphasize that it is not too late to prevent runaway climate change, but that it won’t remain that way for long. He often engages directly with ‘all is lost’ messaging, insisting that the window for meaningful action remains open. The book addresses tipping points and how close the world may be to them, and has a chapter on the specific question of whether there is still time. He argues that this will be a critical decade, and that decisive action now can make all the difference. At the same time, he writes that “it will never be really too late, as there will always be serious campaigning work to be done to prevent things getting even worse in the future than they might otherwise be.”

With an opening section called ‘Reasons to be cheerful’ and a focus on hope, Porritt seems to be deliberately redressing the balance in response to the narratives of despair and grief that are increasingly frequent among activists – The Uninhabitable Earth being the most high profile. That could easily be an exercise in shallow optimism, which this isn’t. “Writing this book has caused me more pain than any other I’ve written”, he observes. Porritt uses all the language of the climate emergency, and doesn’t shy away from how serious the consequences could be, not just for the environment but for social stability and for democracy. The point is not to go looking for signs of hope to make us feel better, but to act: “hope can’t be built on the back of someone else’s actions.”

That’s where the book lands, ultimately – with a call to more radical action. “I’ve come to the conclusion that we have no choice: without mass civil disobedience, at this very late stage, I cannot see any other way of avoiding that threat of runaway climate change.”

This is a fascinating statement from one of the country’s leading environmental voices, who is known for working constructively with big business and with political processes. “As someone who has spent the past twenty-five years working ‘on the inside’ to build a broader consensus for radical change, that’s no longer appropriate as I come to terms with what will be asked of all of us in this decisive decade.”

Porritt doesn’t demand that everybody take to the streets, and he doesn’t endorse any particular movement, though he is clearly inspired by the school strikes. Everyone is going to have to make their own decision about what they do and how they act. Just don’t do nothing. Don’t be a passive bystander to the climate emergency.