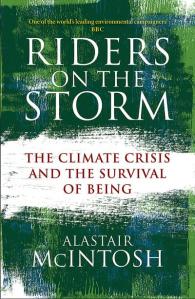 Riders on the Storm is the latest book from Alastair McIntosh. It revisits some of the themes of his earlier book on climate change, Hell and High Water, almost ten years later and in quite a different tone.

It’s a book with three distinct parts. The first is a summary of the latest climate science. The IPCC released three updates in the last couple of years, on land, oceans and ice, and on 1.5 degrees. They get a chapter each here, bringing the reader up to speed on the science and how established it is.

Unusually, McIntosh reproduces the IPCC’s comments on how confident they are, noting their high or medium confidence in how climate change is unfolding, or when it’s more a matter of “narrowing uncertainty” rather than establishing facts. This is important to the discussion that follows, and it’s also a usefully balanced approach – it put me in mind of Mary Annaise Heglar’s words when she describes the need for climate folks to be a ‘truth telling movement’.

After establishing the science, the book moves on to discussing responses, beginning with a chapter on denial. It’s more about psychology than conspiracy, highlighting the way that “the price of such denial, such deficit of courage, is that we lose our grounding in both truth and how the world is.” This chapter is counter-balanced with a chapter on ‘rebellion and leadership in climate movements’, which contrasts denial on one side and alarmism on the other. McIntosh expresses concern at those who interpret science “in ways that amplify people’s fears beyond the expert consensus evidence base.”

While the author is clear that they are not “symetrical” in terms of their scale, impact, or the damage they cause, there are hazards to both denial and alarmism. “Climate denial is a waste of time. But climate change alarmism is a theft of time” he writes, describing how extreme predictions telescope down the time we have to act and draw hard lines. With Extinction Rebellion events beginning again at the start of September, there is a lot to learn from here about what ‘tell the truth’ means, as well as a friendly critique of XR’s approach to nonviolence.

Lastly, the book changes gear in its closing section and investigates the psychology of climate change and its roots in disconnection from each other and from the land. It does this with a dizzying bit of storytelling that goes from a derelict Hebridean croft to the Highland clearances, the emigration of Donald Trump’s Scottish mother, to the un-rooted nature of individualistic consumer capitalism. In response, he describes land trusts and how “communities and the atmosphere are intimately entwined.” It’s imaginative, profound, and a reminder that the British Isles still have their own stock of indigenous wisdom to draw on.

Riders on the Storm is written with wit and self-awareness. I liked the way McIntosh invites readers to engage with it as they please, to skip ahead, or to leave the book before he lets loose at the end. I liked the warning he gives at the beginning, acknowledging his unusual style and that it’s not for everyone. “Buyer beware!” he cautions, “I love few things better than moving from hard science to spiritual reflections by a Hebridean sea loch.”

In fact, you could describe this as a book that starts at a walk – literally so, since it begins on a cultural exchange hike in the Hebrides. We take an amble through the science, then it breaks into a jog as it discusses responses to climate change. We hit full tilt in the last two chapters, before the final pages leave the ground entirely and soar over those ancient landscapes and battered coastlines, finally earning that title of Riders on the Storm.